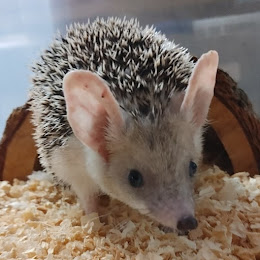 In recent years, the adorably bat eared "long eared hedgehog" (LEH) has begun to appear in the North American pet trade. This species is often referred to as the "Egyptian Hedgehog" but they range considerably beyond that and can be found as far east as Afghanistan, India, Mongolia, and Russia. They tend to live in arid areas, such as deserts and steppes. They are generally active between dusk and dawn, and during the day can be found burrowed under rocks or bushes. They have strong, wide front feet and can dig their own burrows, though they often take advantage of burrows left by other animals.
The scientific name for LEH is hemiechinus auritus. It can be confusing because you may see them advertised as Egyptian or Russian. These are the same species, but breeders have noticed regional differences between those lines that were originally sourced from Egypt and lines originally sourced from Russia. The ones from Egyptian lines tend to have a pointier nose and the ones from Russian lines tend to have fluffier, softer fur.
Care of LEH is similar but not the same as care for the more common African Pygmy Hedgehog (APH). Some of the care considerations for LEH are as follows:
Feeding: LEH require good quality protein: insects, raw meat, small whole prey (chicks, pinky mice), or cooked egg. They can eat a little bit of cooked vegetable or chopped fruit, up to about 1/2 tsp per day. We give ours high quality kibble that is always available, then their treats in the evening. They love those treats and are generally up and waiting for them!
Housing: LEH are very active and need as much space as possible. 10 to 12 square feet or more is preferred. We have been told that they can get stressed and ill tempered if they don't have plenty of room to roam. They need a cage with solid flooring (I like the Krolik XL rabbit cage or the Zen Habitats cages) and fully enclosed, as they can figure out how to climb out. It's fun to provide them with a sand pit or cypress mulch pile (bake in the oven for an hour or two at 325F to sterilize, then cool before using) to play in.
Temperature: We keep our LEH at room temperature, which is 72 to 76 degrees and they seem to do well at those temperatures. Their range in the wild spans a wide range of temperatures, so it's best to ask the breeder you purchase from what temperature theirs are used to and replicate that with yours.
Enrichment: LEH are very curious and can be very interactive. Most will chase a cat toy on a string, and mine try to hunt my cats' tails. They enjoy tunnels, like ferret tubes and fabric tunnels. Most enjoy a wheel, though if your LEH is on the larger side, be sure that the wheel is big enough that they can run without having to bend their back. A 15" chinchilla wheel is generally sufficient. They enjoy play time outside of the cage and are very curious explorers.
LEH personalities are quite different than APH. Some, but not all, explore with their mouths, so may be seen as nippy. If they feel threatened, their first instinct is often not to ball up, but to head butt or bite. This kind of bite can draw blood. They are generally not aggressive, but you do need to be aware of where their mouth is when handling so as to avoid giving an opportunity to nip. I seldom get nipped and have not had a hard bite yet, but I am always aware and alert that it could happen. Because of this, they are not recommended for young children or nervous owners. Consistent handling does seem to help them develop trust and to be calmer when handled.
LEH are generally bigger than APH, though some smaller LEH may not be as large as bigger APH. My biggest LEH is double the size of the smallest. They do generally need attention to grooming their nails as they grow quickly. This is generally a two person job. LEH tend to live longer than APH, with an average captive lifespan of 7 years.
LEH are currently more expensive than APH because they are only recently brought to the US, having been imported from breeders in Europe, which is a very monetarily consuming endeavor. They generally only have one litter per year, with February and March being the most typical times, and have 1 to 4 babies per litter.
LEH make wonderful pets if you are prepared for their needs and their special personality. 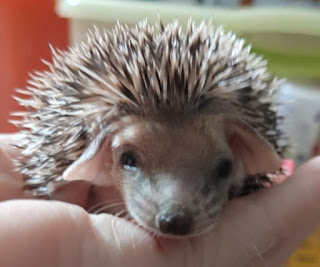 Avoiding Being Gotten By An Animal Scammer

Very sadly, animal scammers have been popping up all over the Internet, trying to pose as legitimate businesses, ripping people off fo...